Hello, Engineers! Happy New Year everyone! We hope you all got through the festive weeks with full bellies and happy memories. For us, 2017 was an excellent year, where we saw new peaks in player counts, and lots of exciting new content. To start the new year off with a bang we’ve prepared a great 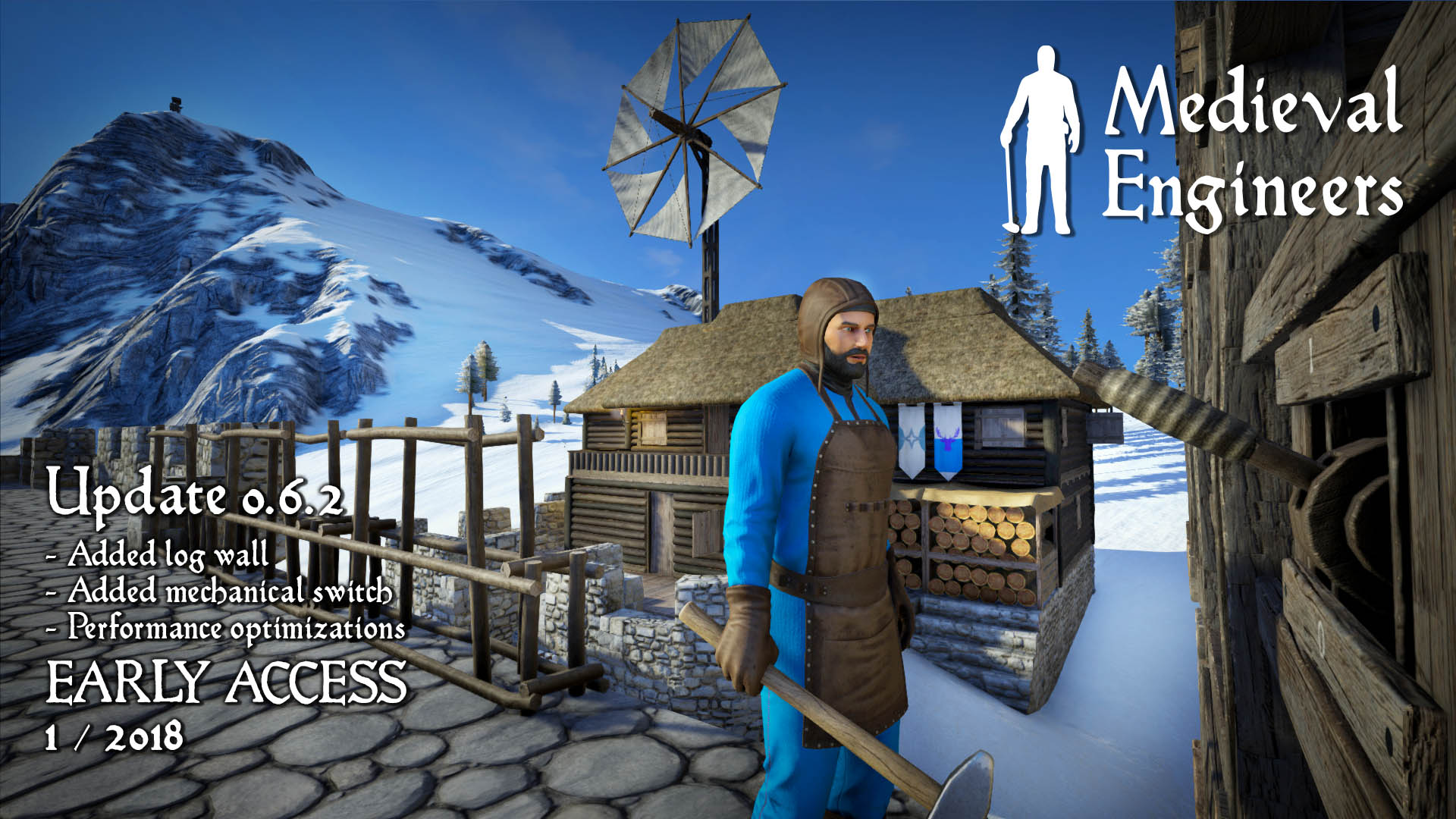 Hello, Engineers!
Happy New Year everyone! We hope you all got through the festive weeks with full bellies and happy memories. For us, 2017 was an excellent year, where we saw new peaks in player counts, and lots of exciting new content. To start the new year off with a bang we’ve prepared a great update for you guys! The list is pretty large, so enjoy reading (And playing!) through all the changes we’ve prepared for you!

New Features:
– Log walls: Similar to the palisades, these blocks allow you to create your buildings in a different style, it is available early on in the game, before moving on to the clay or stone walls.
– Mechanical Switch Block: This block lets you turn off sections of your mechanical grid.
– New Steamworks integration: This brings with it things like mod collections, mod dependencies, a much more robust mod handling solution, etc. For more information, check the Modding Changes part of this post.
– Upgraded parallel logic: In our attempts to parallelize the game more to make use of all those cores, we inadvertently overused the threading, causing them to block each other. We have reworked our parallel logic systems, and now your CPU should be used more effectively, regardless of how many cores you have!
– Camera shake: We have introduced a very slight camera shake to certain actions like cutting trees. This will make certain actions feel a lot more alive.
– Broken tool handling: Any tool that breaks now spawns a broken tool item rather than immediately disappearing from your inventory. It can be melted into ingots.

General Improvements:
– Members of your house can pay ownership taxes again.
– The main issue causing player data corruption was resolved.
– Resolved a crash when the server was trying to send non-existent data to a client.
– Other players no longer receive a notification whenever someone gets promoted/demoted.
– Removed GPS from Medieval Master: GPS technology was not yet invented in the Medieval times.
– Removed fast travel setting for traveling to undeveloped areas, made obsolete by the fast travel by roads.
– The message that is displayed when you are adding dirt on top of another player now correctly writes their name.
– We now save the third-person camera distance, so that when you reload the game your camera is in the same position.
– Slightly increased character crouch height, as characters were able to crawl into places where the model would clip through the objects.
– Player corpses: When you kill someone, or you die, the body can be looted. If you wait long enough the ragdoll will despawn and leave a lootbag behind as always.
– The wild variants of the farmable plants now have a proper full growth cycle, including decay and regrowth.
– Steel production now requires linseed oil for quenching. This makes steel a little bit more valuable.
– Cancelling a craft now returns the used items correctly, even if the recipe requires tagged items.
– You can no longer shovel while crouching.
– We have re-balanced the material costs for all tools.
– The killing blow with the crossbow now correctly shows hit markers.
– Crossbow bolts now have a fall-off: All shots have a fall-off now, with wooden crossbows having the least amount of power and steel crossbows the most.
– Seedbags no longer consume twice as much durability on clients as they did on the server.
– Disabled the tutorial for Creative mode, though you can still start it by pressing F1 and clicking “Restart Tutorial”.
– Added sawmill quest to economic research tree, it is similar to gristmill quest, completing one also completes the other.
– Tweaked some of the quest steps to function in creative mode, preventing the tutorial from getting stuck in creative.
– Renamed “Bandit Deterrent” research to “Hunting”, as it was always about hunting deer, and not scaring away bandits.
– We’ve added the quest step completion sounds from the quest steps that were missing it.
– Added copper shovel to several quest conditions where it made sense to have it.
– Slightly eased up the military quests.
– Clay walls now require clay to build.
– Wheels and catchblocks are now stackable up to 5.
– Changing target while holding F to pick-up items now resets the timer.
– Fixed several cases of small blocks not sticking to large blocks correctly.
– Fixed some cases of large blocks not correctly turning dynamic when they should.
– Deconstructing the dead space engineer now gives you actual items, rather than non-existent stuff. But it’s still creepy.
– Added support for deconstruction to return other resources, mechanical blocks now return empty clay jars upon deconstruction.
– Moving a claimblock to another area and deconstructing it there to avoid having a claimblock is no longer possible, the claimblock falls apart as soon as it becomes dynamic.
– We taught barbarians how to correctly estimate their distance to players so that they can actually hit you again.
– Barbarians no longer spawn in claimed areas.
– Altered Barbarian Loot tables.
– Deer now always drop pelts.
– Updated deer animations.

Modding Changes:
– Overwriting file paths: Any file path that matches a file in the vanilla directory structure, or mod directory structure, will now overwrite it with whichever mod was loaded last. This means that you can now easily replace textures, sounds, etc. just by making sure it follows the same Content/../filename as it does in the base game. This does not apply to SBC files (They are managed by the Definition Manager instead), shader files (We don’t want people to break GPUs), but all other files are overwritten. Please double-check your mods are not accidentally overwriting files.
– Mod dependencies: Mods can now list other mods as a dependency. When you do so, the game will automatically add and download that mod in the mod list. For modders, this means you can now create library mods that other mods can rely on. For example, one mod could introduce coins to the game, another mod could create a mint, creating gold coins out of gold ingots, and yet another mod could allow you to use the gold coins to pay taxes.
– Mod collections: You can now create a collection of mods and load it in its entirety. This one is especially useful for server admins, who can create a mod collection and manage it on the steam community pages, and then let their dedicated server just load the mod collection.
– Mod downloading: We are now making use of the new Steam UGC system, which allows a much larger mod package. Some mods, especially the ones with 4k textures, would get quite large, and the old Steam API would not accept these mods. With Steam UGC this is no longer a problem. One big change here is that only local mods are now stored in appdataMedievalEngineersMods, rather than all mods. The mods you download are automatically managed by Steam, so it didn’t make sense to duplicate them on your harddrives. Finally, they are no longer zipped up, which allows Steam to perform incremental downloads, rather than having to re-download the whole mod again and again, each time you would make a change.
– Added support for research quests to have parent quests in other branches.
– Custom planet scenario now allows custom planets again.
– Whitelisted MySectorWeatherComponent.
– Whitelisted MyVoxelMaterialDefinition.
– Crafting components now support Input, Output and Crafting inventories. When all three are specified the crafting cancellation fix is applied to your crafting station. Otherwise, the old behavior will be used.

Old Version
The last 0.6.1 version, the one you’ve been playing on for the past three weeks, remains accessible on the last_week branch on Steam. Should this update have any major issues to run you can let us know what is wrong and then revert to this version to keep playing until we fix it.

Livestream
Join us today at 7pm CET for our Medieval Engineers live stream with Tim “Deepflame” Toxopeus, the lead producer of Medieval Engineers, and Xocliw, host of the Keen Community Network!
https://www.facebook.com/events/398922800561054/
https://twitch.tv/keencommunitynetwork