Hello, Engineers! We’re thrilled to announce that the 0.7 update has arrived and it’s filled to the brim with tons of exciting new features and enhancements! Whether you’re looking for updated block visuals, new blueprint building in survival, improvements to multiplayer or modding tools, there are plenty of fantastic new additions to experience in Medieval

Hello, Engineers!
We’re thrilled to announce that the 0.7 update has arrived and it’s filled to the brim with tons of exciting new features and enhancements! Whether you’re looking for updated block visuals, new blueprint building in survival, improvements to multiplayer or modding tools, there are plenty of fantastic new additions to experience in Medieval Engineers!

We are extremely proud of the work that has gone into the design of 0.7. The models — and many aspects of building in the game — have been redesigned from the ground up. Today we unveil this, and leave 0.6 behind. We recognize that with such a huge change, there will still be bugs, errors, imbalances. But given that Medieval Engineers is still in Early Access, we wanted you to jump in, see how it works, and help find the things that don’t work right. If it ever becomes too much, you can switch back to the stable 0.6 branch as always!

WHAT HAVE WE UPDATED?

Block Visuals:
We have remodeled and retextured almost everything when it comes to blocks. You’ll notice that there are no longer any hard edges. We have introduced parallax shading to bring more depth to the blocks without increasing the triangle count, ensuring the performance does not degrade. Additionally, we re-added some old blocks that got lost (wall with double-window with a pillar, etc.). 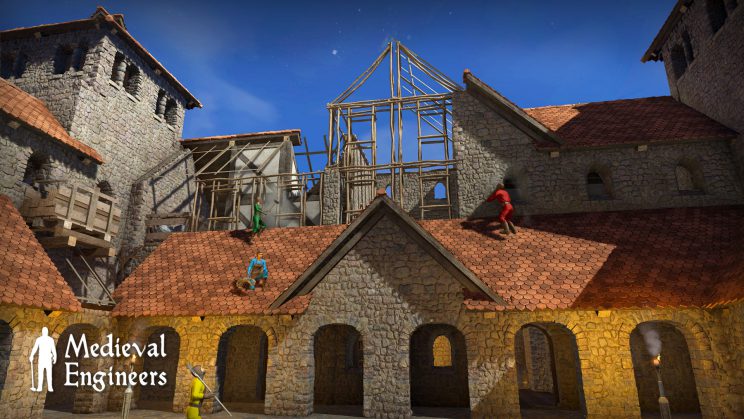 Updated Trees:
The trees in Medieval Engineers also got a makeover. There are new pines, new spruces, and oak trees!
Tree cutting has also been tweaked, so go check out those new oaks and don’t forget to yell timber when you cut them down!

Female Engineer:
The female engineer is looking better than ever, as we’ve incorporated some of the features from the Space Engineers female engineer. Likewise, her body proportions look much more realistic. 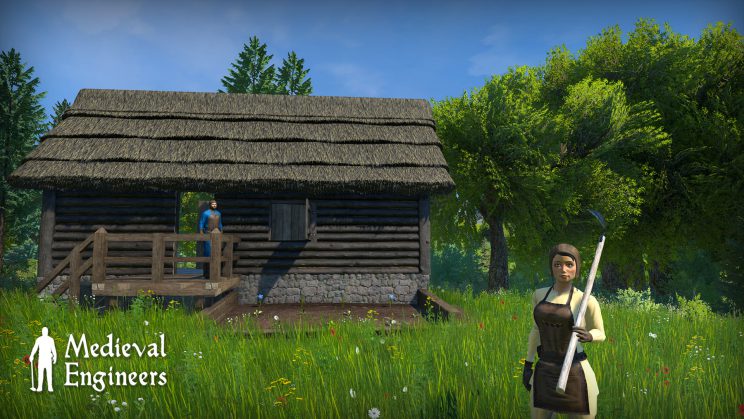 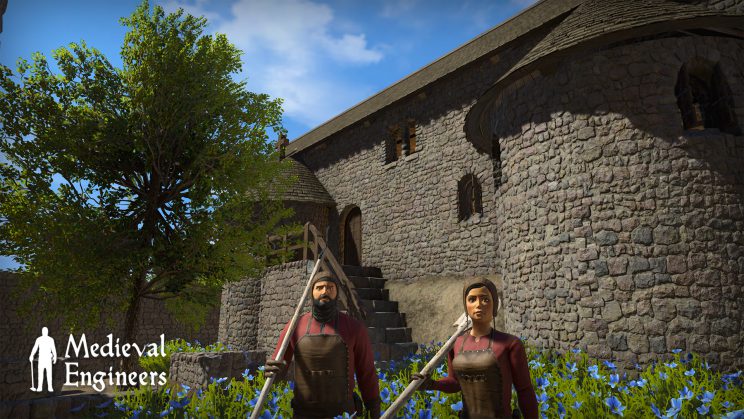 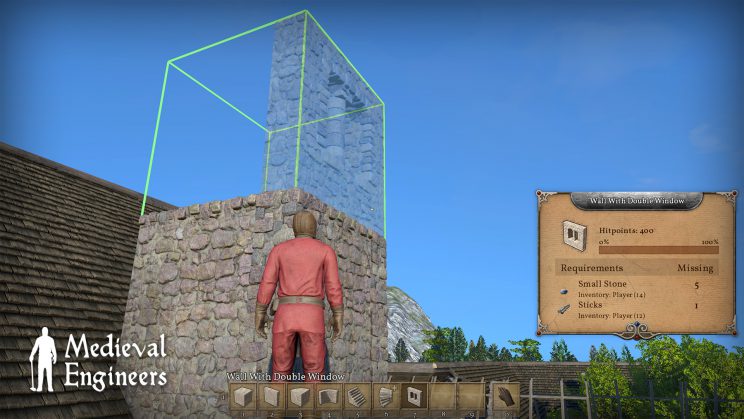 MULTIPLAYER
We have upgraded the multiplayer behavior, especially with regards to the grids, to ensure they are sent over the network quicker, and fully connected, to prevent grid desynchronization, ropes getting cut, and other horrible scenarios that would cause clients to freak out. Serialization is now much faster in multiplayer. There is also better entity grouping to ensure grids load in together, which combined with lots of minor fixes, should significantly improve bandwidth.

Blueprint Building to Survival:
With the simple click of a button and a few swings with your trusty mallet, players can now add large buildings, such as castles to a survival world, as well as small constructions, including catapults, which are ready for action! Plus ropes and connections are now saved in blueprints. Blueprints now automatically store, and display, which mods are required, so you can always see what you may be missing when you place a blueprint. It also checks for research, shows you the resources needed to build it, and provides an easy way to check your progress. You can now work together with your friends in building your town! 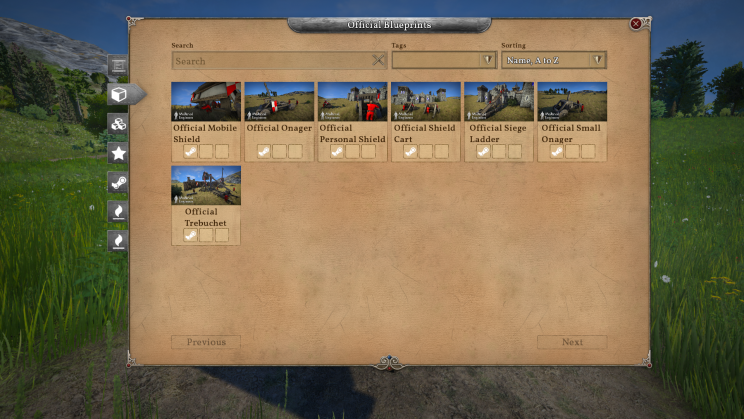 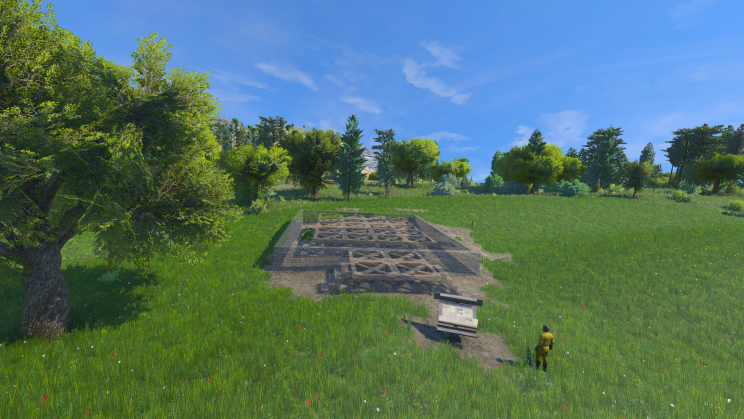 World Chunking
World chunking is a new system that unloads objects that are very far from players. By doing this, we managed to vastly accelerate world loads, particularly for really large worlds. Dedicated servers should also see a reduction in memory usage. On top of this, it removed the need for abandoned grid decay, abandoned grids are usually not loaded into the scene, and thus do not consume any performance anymore. You can go explore servers and discover all kinds of ruins and structures left behind by people!
This vastly accelerates world loads, saves and unloads entities that have no players nearby, thereby reducing memory usage and performance loading. It also removes the need for abandoned grid decay; abandoned grids no longer take up any performance.

WHAT HAVE WE OVERHAULED?

GUI:
Be sure to check out the new main menu, blueprints screen, crafting screen and medieval master screen. Every other aspect of GUI has been retouched to fit this new style for the game. It’s not only visual, every screen also had careful thought put into it about what we want to show, in order to improve the flow of user interaction. 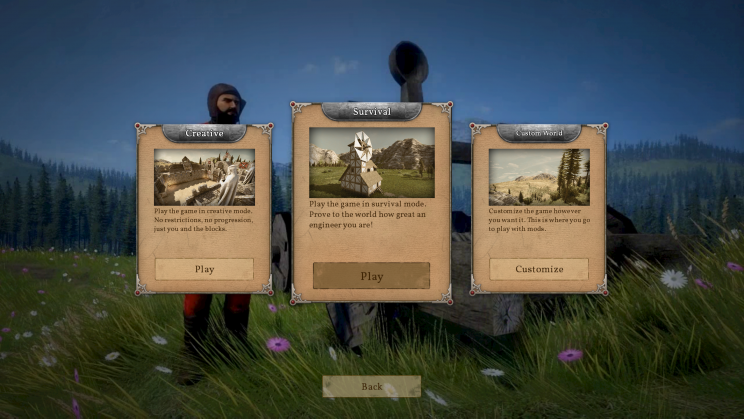 Audio:
Medieval Engineers has never sounded so good! Lots of places that were missing sound now have sounds. We also improved the sound quality in many instances, and we added effects and filters, such as reverb and low-pass filters.

NEW ENGINE FEATURES:
Under “the hood” of Medieval Engineers, there are rendering Performance improvements and GPU particles. There are also better visuals for sunsets and sunrises, and improved logging behavior to help us catch more bugs. 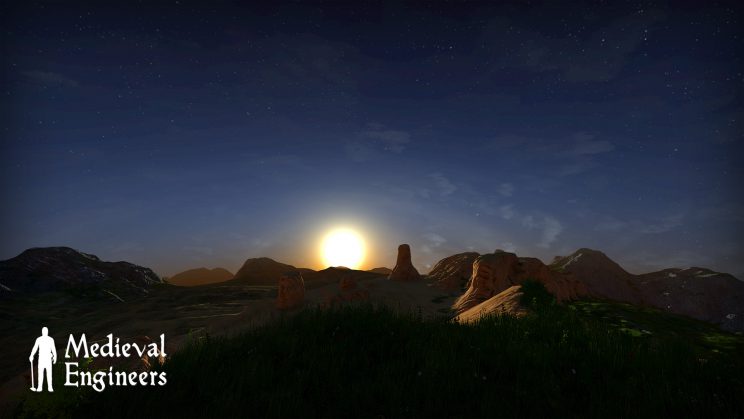 FOR MODDERS
For our amazing community of modders, we have a nice list of new tools for you:
-Crafting system refactored to support world chunking and more, see this guide for more info: https://docs.google.com/document/d/1SmAHtGy1YwGOt6XF9SOSooIimcZQnFt4aamiZA-RK5U/edit#
-ModAPI dialogs
-Dynamic environment system access
-Added support for underground and inside checks to environment rules
-Programmable animation layers (thanks to Equinox)
-Navigation mesh session component (thanks to Equinox)
-Seedbags now support seeding on non-farming voxels and can plant non-farmable items.
While we are working out the kinks in 0.7, it may be worth creating 0.6-based copies of your mod so servers that want to remain on 0.6 for a while longer are able to continue playing without too much disruption.

OTHER NOTEWORTHY FEATURES
Last, but certainly not least, we have a voxel hand that obeys landscaping stakes. This was a highly requested feature from the community to fix trouble spots when landscaping.
We hope you enjoy all of these new additions to Medieval Engineers, as we know that we’ll enjoy seeing what you create with them.